Why you should switch to a MEDICAL GRADE, mineral sunscreen now

Whether you live in one of the sun-soaked states across the U.S. or if warm weather is just arriving where you are, now that things are opening up again, chances are you’re lining up summer getaways and can’t wait to soak up the sun, stat.

To change image and content go to Side Area widget 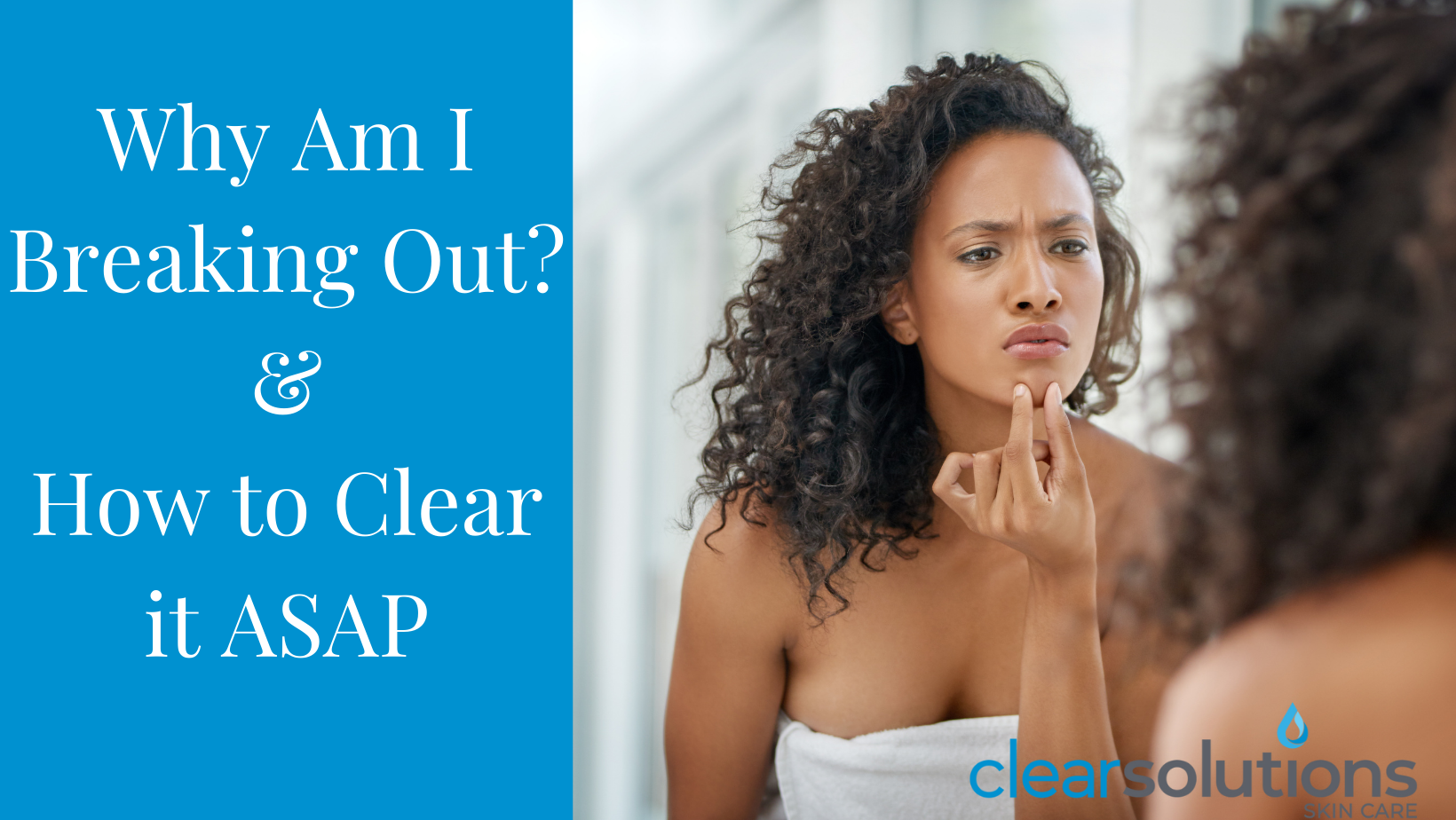 Why Am I Breaking Out? And How to Clear it up ASAP

Since you’re asking this question, I’m willing to bet that you also have a breakout right now.

So after I tell you why you’re breaking out, I’m going to tell you how to get rid of it immediately.

Well I’m not, and those types of articles are a form of evil in my opinion.

They’re part of the reason why it took me over 5 years to get rid of my breakouts and stubborn acne.

I know you weren’t expecting this, but you are about to learn something that will change your life in terms of breakouts and acne.

Somehow it seems that I’m the only person on the entire internet who knows how to clear a breakout or any other type of acne.

I wish I weren’t honestly, because then I probably wouldn’t have suffered for 5 years straight.

So Why Am I Breaking Out?

You’ve probably heard from different sources that clogged pores, face-touching or sweat is the cause of breakouts.

Or maybe you’ve seen a face map and learned the cause is due to your liver or kidneys.

I agree that face touching or sweat might help aggravate your breakouts a little bit – but it’s not even close to the main cause.

After so many years of struggling, I’ve learned the truth.

Why You Are Breaking Out:

There’s no other way around it.

The cause of breakouts and acne is a weakened immune system.

Antioxidants and minerals are the fuel to our immune cells.

The trick is to make your immune system strong enough to defend your cells against acne-causing bacteria.

Since you are breaking out right now, it means your body clearly isn’t strong enough to defend your skin cells.

Things like chronic stress, your genetics, and poor diet cause your immune system to weaken – by creating something called free radicals.

If you sweat frequently, wear make-up every day, and stress a lot – you’ll probably be dealing with breakouts.

Antioxidants and certain minerals are able to eliminate these free radicals.

Here’s a clinical study if you don’t believe me.

But changing your diet doesn’t help much from my own experience.

That’s because you’ll still get nowhere near enough antioxidants.

Sure you might see a slight improvement, but it will take weeks of strict dieting (which really sucks).

What Happens to Your Skin When Your Immune System is Overpowered?

When this happens, your immune system can’t defend your skin cells against a harmful bacteria called ‘flora’.

An infection will occur if your skin cells aren’t protected.

By forming pimples, your body can trap the invaders and push them out through your pores.

Your immune system is the only thing protecting your skin cells from the skin flora attacking – and causing a bacterial infection.

So How Does That Cause Acne And Breakouts To Form?

Well apparently the human body has another defense system in place for when your immune system fails, but you are not going to like it.

The moment your brain knows about the harmful infection on your skin, it orders your sebaceous glands to start making loads of extra sebum (aka the white stuff inside pimples).

The full definition of sebum is here if you want to read more about it.

Why is Sebum Good and Bad?

The good part is that sebum is used to layer your cells and protect them against bacteria.

Sebum also entraps the bacteria, making them unable to do any more damage.

That’s good because it shows your immune system is at least doing its job (just not very well).

The way your body gets rid of this bacteria-filled sebum is by forcing it out through your pores.

That’s when the pimples and breakouts happen.

I know this based on my own research and experience – but there is a massive amount of proof to back me up.

One example would be this medical journal published in 2015 by 7 of the top Dermatology departments in the United States.

The problem is that acne creams and cleansers don’t address this cause of acne– which is the single reason why none of them have ever worked for me.

For years I tried product after product, only to be disappointed every time.

My whole teenage and young-adult life was nearly ruined by these worthless treatments.

Why Do You Have a Weak Immune System?

The answer used to be from genetics, but not anymore.

This study in 2010 done with identical twins concluded that your environment has a much greater effect than your genetic inheritance.

That means mental stress plays a key role in the formation of breakouts.

There’s a number of reasons why your immune defenses could be lacking strength.

The main 3 I’ve listed below.

You should know yourself well enough to know which of the following is causing the problem.

Stress is the most detrimental thing for your immune system.

There are multiple studies on the APA page here that show how much stress impacts the immune system.

It’s not easy to avoid but try as hard as possible to believe that your face will be clear by next week (because it will be).

Your immune system (and your entire body) literally use the nutrients from your diet to survive.

Think of nutrients as fuel for your body and all of its systems.

If you don’t provide it with enough fuel, then it’s NOT going to work properly – because it won’t be strong enough to fight off infections in your body.

I’m not saying you can’t eat sweets and food that isn’t healthy – you still can as long as you’re getting enough nutrients from healthy foods in your diet.

I have a genius way for you to think about this.

Picture your body as a car that runs on gas AND electricity.

Every day you need to fill up your tank (eating foods rich in vitamins and minerals – like vegetables), and charge your battery (sleeping).

Unlike a car though, your body knows that it cannot run out of gas (because you’ll die).

That’s why it only runs at half speed when it’s low on fuel or energy.

I know people who start breaking out every Monday like clockwork – because they had no sleep over the weekend.

But anyway let’s move on,

Cystic acne might take a few days longer to clear, but not much.

Same with pustular or nodular acne.

According to the National Skin Centre in Singapore, cystic acne occurs after your teenage years – which tells you if it’s cystic or not.

If you are younger than age 19 then it’s probably comedonal, which is a little bit easier to get rid of.

It doesn’t matter though, because they have the same cause and solution.

How Did I Finally Clear Myself?

With an oral antioxidant treatment.

It wasn’t until about 9 months ago when the miracle happened.

And it took less than 3 days for the most part – but there was a giant improvement within the first 13 hours.

They’ve only been around for the past 3-4 years, but now they’re becoming the most popular treatment worldwide.

They’re just about as strong as an antibiotic, but that’s fine with me.

I can tell because it’s the first treatment to actually work for me – so they must be strong.

The one I use is called Derma Drinkables, but that doesn’t mean the others don’t work also.

Murad makes the other most popular one.

If you’ve followed me, then you already know that I don’t advertise or promote anything.

If that were the case, then you probably wouldn’t follow me in the first place.

The only reason I use Derma is because it’s much stronger, but it costs more, unfortunately (around $25 a pack).

The Miracle of Clearing Breakouts

The first morning after using it the day prior, not even 15 hours – the difference was beyond jaw-dropping

I’m not going to lie and say it all disappeared overnight, but by that evening my worst pimples were reduced to a faded pink mark that was barely noticeable.

And 36 hours later I literally had nothing (if I did it then was nearly invisible and completely gone by the next day).

No more acne on my forehead or chin, and no more breakouts.

That’s right, no more breaking out.

It took about 3 weeks of being clear for me to realize that I wasn’t going to wake up with whiteheads on my chin and forehead anymore.

Maybe I’ll have 1 or 2 stray baby pimples on occasion, but they’re unnoticeable unless you have a magnifying glass.

But I’m serious when I say on occasion.

And unlike the pimples I used to have, these become even more invisible when I pop their baby head.

I know more than anyone how stressful and helpless it feels to deal with nonstop breakouts.

And to endlessly wonder in your head, ‘why am I breaking out every single week?’, when you have no clue.

Nobody should have to deal with a mental burden like that.

The good news though is that you found me, which means that you’re not going to feel that way anymore.

Welcome to
My Rewards

Join our loyalty program to unlock exclusive perks and rewards.